What Puts Efficient Microbes Probiotics into a Different League

23 Mar What Puts Efficient Microbes Probiotics into a Different League

The word probiotic literally means ‘for life’ and describes the concept that a probiotic encourages the formation of a living colony of specific beneficial bacteria; in this case in the human digestive tract. Today, Probiotic means product, in fact it means thousands upon thousands of products globally which have adopted the term.

DRY PRODUCTS
Dry products come in many shapes and sizes, however the technology behind them is broadly similar and generally involves freeze-drying. It is possible to freeze simple organisms and cells under low temperature and pressure in such a way that all the water is removed without damaging the delicate structure of the cell or organism itself. In the case of probiotics this places the bacteria in a state of suspended animation which is well suited to long term storage. Once moisture becomes available to the bacteria they re-hydrate and a proportion of the bacteria will go on to function and divide again as they did before freezing. This means that many strains can be combined into a single product. However, there are downsides to freeze-drying, not least the high expectations placed upon bacteria to re-hydrate and regain function quickly after swallowing into the acidic environment of the stomach.

There really is no word to describe the state that microorganisms are in after freeze drying. One could say “dormant” but this really doesn’t suffice. All the moisture that is part and parcel of each microbe has been removed. The theory is that once ingested, these microbes re-absorb the moisture and return to life. Even if they do fully return to their former state with no harm done, nobody has been able to tell how long it takes. If it’s more than an hour or two, the microbes will be past the stomach, through the intestine and in the bowel before they wake up. Or even further along.

Any microbiologist will agree with the statement that freeze drying of microbes causes some form of cellular damage, which can greatly affect performance of the microbes. This is the main reason most probiotics on the market contain billions of cfu (colony forming unit) per ml. It is necessary to use tremendous numbers of “weaker” microbes to get the effects of “stronger” microbes.

LIQUID PRODUCTS
Liquid products generally contain live bacteria, which is intuitively a good idea; to be called a probiotic in the first place a product must contain live bacteria, but it’s important that these bacteria once swallowed can reach the gut and colonise to confer a benefit. Live products must also contain a source of nutrition for the bacteria, however, this raises several new issues. Firstly, storage and shelf-life can be short for some live products (check the labels). Secondly, palatability, since probiotic bacteria are not always tasty creatures. Also, an important consideration is competition between bacterial strains within the same live product; they can compete with one another for resources in the bottle. This problem is one reason why it is very difficult to develop a multi-strain live product – Efficient Microbes technology has been able to achieve this.

All microbes that have a probiotic or beneficial effect on the body are “mesophillic”. A mesophile is an organism that grows best in moderate temperature, neither too hot nor too cold, typically between 20 and 45 °C. Organisms that prefer extreme environments are known as extremophiles. In essence, they like our body’s natural temperature and that’s why they have formed a symbiotic relationship with other life forms, in this case mammals. Put them in a cold environment and they die. So, the whole concept of “freeze-drying” mesophillic bacteria is a complete contradiction. 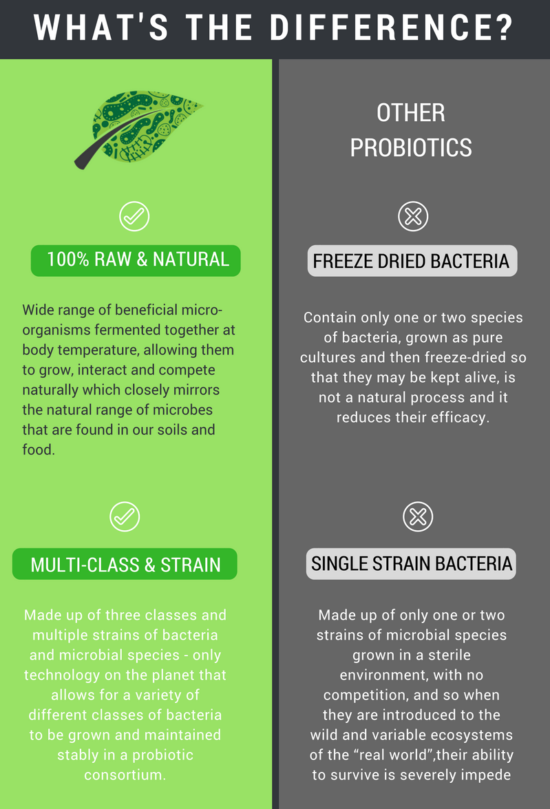 SINGLE STRAIN DRY PROBIOTICS
There are those who believe that a single strain of bacteria may be all that is needed to confer benefit; Acidophilus species are a good example, and so there are plenty of producers of single strain freeze dried probiotic tablets, capsules and powders. The human gut contains more than 500 different species of bacteria, so to take a single strain in an attempt to hit the bullseye may not always deliver success.

SINGLE STRAIN LIQUID PROBIOTICS
With a few exceptions, live probiotic products, particularly the diary based products containing yoghurt or milk are single strain probiotics containing bacteria which thrive on the sugar found in milk; lactose (hence Lactobacillus). These bacteria tend to be strains from the Bifidobacteria or Lactobacilli genera which are very common in the environment.

MULTIPLE STRAIN DRY PROBIOTICS
As above, freeze drying allows for multiple species and strains to be combined in a single product without fear of competition, however other problems can arise as a result, chief amongst these being time of re-hydration and recovery of function for the bacteria.

MULTIPLE STRAIN LIQUID PROBIOTICS
On paper, these products deliver the best of both worlds; providing several bites at the cherry in one go, and overcoming the problems with dry products. However, the devil is in the detail and it is very difficult to deliver a multiple strain live product, which is why they are few and far between.

Raw Biotics Probiotics contain multiple strains as well as being in a liquid form offering you one of the best probiotics on the market.

Raw Biotics products are complex microbial cultures consisting of multiple strains. The manufacturers are clear that focusing on the population counts are not as important as focusing on the product being in liquid form and the diversity of the microbes. If Raw Biotics products were to have one less strain of microbes, these products would function like all other probiotics and the results would not be as significant.

So, when we talk about probiotics, perhaps it’s important to specify what kind of probiotic we are referring to, at least to make the distinction between live and freeze-dried, as well as to look at how many and which strain(s) are in the product.

Click here to visit our home page for more information.